September 20, 2009
I would like to listen to more podcasts but I don't have the time. The trouble with pod-casts is that they take too long to listen to and you cannot skim through them quickly to find the bits of interest.I have been playing around with an open source audio tool called "Best Practise" to see if I could speed up a pod-cast while still retaining comprehension.

The problem with increasing the playback speed of audio is that pitch increases in proportion to the speed increase. Everybody ends up sounding like "Alvin and the Chipmunks". Best practise has some very clever algorithms which allow independent control of pitch and speed. 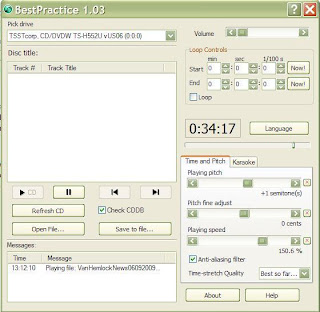 If you leave the pitch control in the middle and increase the playing speed it will endeavour to keep the pitch correct. From what I can tell it does this by chopping out bits because by the time you get to 200% speed the audio is unintelligible. This is where the pitch slider comes in handy. By letting the pitch slider increase slightly you get more of the missing phrases back and the speech become intelligible again.

A bit of trial and error is required but I found a good compromise at 150% speed and +1 half tone of pitch.   If you are in a hurry 200% speed becomes legible at +6 half tones but the voices get a bit squeaky.

For reference 12 half tones corresponds to one octave or a doubling of pitch so 200% speed and +12 half tones is just raw speeding up with no pitch correction. This is very unpleasant and hard to listen to.

There is another button called anti-aliasing which removes some warbling artefacts but can reduce comprehension at high speeds. I prefer to leave it on.

I used pod-casts from Van Hemlock and Epic Dolls  to check my settings on both male and female voices  and the 150% +1 half tone setting works well for both. The only nuisance is that you need to download an mp3 version of the pod cast to use Best Practise on it.