I saved a child today, an eight year old boy who got stuck on the side of a mountain.

My family and I were taking advantage if some lovely September sunshine and climbing a local mountain called the Great Sugar loaf. This peak is only 500m high but it gets steep near the top and makes for an energetic 40 minute climb with a bit of hands and knees clambering at the end. That is if you take the well beaten path. If on the other hand you try to climb up the wrong side you are faced with unstable scree where every step threatens to dislodge a landslide taking you and half the mountain with it. 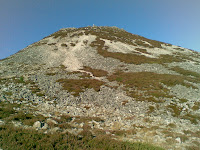 We had already reached the top and were making a leisurely descent when we spotted a lady in some distress. Her eight year old son had on his own initiative attempted to climb up one of the scree falls and was now stuck half way up an unstable slope. The mother could not reach her child and the boy having just realised his peril was frozen in place.

My wife asked a worried passer by whether or not the mother had a "man with her to help" (so much for 40 years of feminism) and on being told no she bravely volunteered ME to climb up and save the boy.

There was no way the unstable rock slide the boy had clambered up would support my 90 kg frame so I had to climb up a parallel route and slowly work my way over. This was decidedly scary. On several occasions I found myself prostrated to the side of the mountain trying to keep the loose rocks in place by force of will alone.

The one thing that gave me hope was that in between scree falls there were sporadic patches of heather. Common Heather (Caluna Vulgaris) is wonderful stuff. It covers mountain and moor with a beautiful purple coat but it is also unbelievably tough, resistant to grazing, burning, physical damage, and having a 90kg man hanging off the side of a mountain merely by its purchase on the rocky ground. I can think of no better plant on which to bet your life so I formed a plan that would bring the boy up to the top of the mountain by following the trails of heather. We were as close to top as bottom and I figured ascending would be safer than descending.

There was a problem.

The lad was strangely reluctant to relinquish his unstable rocky perch for the safety of a firm grasp of heather. Thinking that he underestimated the sturdiness of the plant I tried to reassure and coax him to follow the heathery trail upwards. Long minutes passed with both of us clinging to the side of the mountain before the boy admitted that he didn't want to grab the heather because he had seen a wasp in it.

There were one or two wasps flying about but not many. In any case this is Ireland. We don't have killer wasps, killer bees, killer snakes or killer anything else. I can categorically assure you that the minor discomfort of an Irish wasp sting is infinitely preferable to plunging to one's death. Still the boy had a phobia of wasps and refused to avail of the safety of the heather.

I re-assured, I cajoled, I made up stories about non stinging mountain wasps but the lad remained resolutely suspicious. When I eventually wore him down he began to move slowly, ever so slowly along a path which gave him some purchase on the heather while minimising his contact with it. I followed slowly behind him one hand supporting his back, one hand grasped firmly around the life saving heather.

Inch by inch we ascended with encouragement and advice being shouted from his mother at the summit and my own family below. It took a while but we finally reached the top and safety. There was a round of applause from onlookers but given the surly look the boy gave me as he ran to his mother I imagine his first words were to complain about the man who tried to get him stung by wasps.
Posted by mbp at 8:54 pm

It's just like an escort quest NPC to run off at the end with nary a hint of thanks.

Sounds like an epic quest though, and it's good to see that heroics are alive and well and not just dungeon runs for people chasing after purple pixels.

Maith thú! I'm led to believe is an appropriate phrase.

Thank you guys. Please don't think me vain for writing about the episode but it is such a rare occurrence for me to do anything even vaguely heroic that I feel entitled to a bit of pride.

Well done on the Gaelic Melmoth. you even got the fada over the u right. With regard to mmo escort quests I will never again complain they are unrealistic because the escortee refuses to go by the safest route.

Don't worry, I'll take real heroics over digital raid success stories any day. This was a neat story, thanks for sharing :) It's too bad the kid wasn't more grateful for your saving his life, but I bet he will think about it later and realize he should have said thank you.

*chuckle*
No good deed goes unpunished. At least the wasps didn't make you a liar.

You've surpassed my awesomesauce quotient for the week, good sir. :)

And no, I won't ask if a chest magically appeared at the end of your quest and gave you some purple gear. I'm going to assume the awesomeness of the adventure was enough reward. :D

I laughed out loud at the non-stinging wasp story part. :)

Thanks all for your comments. The incident actually had a side benefit - I have been basking in a warm glow of respect from my kids all week. Doubtless this ill soon pass. In any case - I must get back to the business of writing about games!