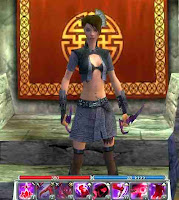 April fool is long gone so I can finally introduce you to the real Nightflower Blossom, now a level 15 Assassin working her way through Factions. I am enjoying the assassin role so far , even with the starter skills you seem to be able to lay down a tonne of damage on single opponent. It is a much more focussed role than either the paragon or the mesmer I have played before. The assasin's role is to pick a target and kill them, everything in the assasins skillbook seems to be geared towards getting in, making the kill and getting away again afterwards (if possible). Things get messy though against more than one opponent. Those same skills that can take someone out so quickly can drain your energy and leave you helpless against your victims buddies. This is not a character to try and get a survivor title methinks. I have already accumulated 28 deaths in 15 levels (most of them on a particularly difficult quest called "Quimangs Last Stand").

The skill bar I am showing above is actually something of an evolution for me. I dropped a couple of heavy hitting critical strikes skills for dagger mastery equivalents which do less spike damage but have better energy management. This new bar allows me to keep fighting for longer and to keep up a bunch of useful enchantments. The skills are:

A bunch of buffs:
Way of perfection (Criticals heal you)
Shroud of Distress (75% block if health under 50%)
Sharpen Daggers (Attack skills cause bleeding)
Critical Eye (Increased chance of criticals + extra energy on a critical)

And finally a self heal:
Shadow Refuge.

at level 15 I have 9 dagger mastery, 7 shadow arts and 8 critical strikes and this setup works pretty well. It helped me finally kill that b*tard "Quimang" so I must be doing something right.
Posted by mbp at 10:43 pm

Sounds fun, I have yet to try Guild Wars, but the no-subscription aspect is appealing. I have heard that Assassins are quite difficult to master, but it sounds like you're refining their playstyle nicely.

I while back (almost a year) I posted an Assassin build that still works pretty good even today. I'd probably swap a few skills around if you are going to use it for PvE, but you get the idea:

The best weapon you can give your sin for PvE, is not daggers but a scythe. They crit so often for max damage and they do AoE damage.

Hi Anton. If you have never tried GW then I strongly recommend trying it even if only to appreciate how different it is to other mmos. Its not just the subscription model. Even at low levels the combat is tougher than a traditional mmo but other aspects of the game are much easier and more player friendly. Free fast travel to anywhere, free instant respecs. The PVE game is best thought of as a single player game where you can group up with friends if you want. OF course the PVP aspect is rightly famous but I have no real experience of that.

Crimson that's a fairly awesome Assassin / Dervish build. I am not at the stage where I can optimise stuff yet though. I haven't even gotten off Shing Jea Island yet and am limited to the skills and equipment I can pick up there. Its probably for the best anyway - I am trying to "learn myself" into the role.

Yeah for sure. The best fun in any game comes from learning new things on your own.