Lotro: A Champion with a Shield 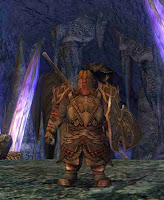 A Champions primary role is all out melee damage but in Glory stance a Champion swaps dps for survivability and threat generation which allows them to do a pretty good job of tanking. Its not quite as simple as grabbing a shield and popping glory however. Glory mode has drastically reduced power and fervour generation which forces the Champion to rethink their whole skill set.

A recent moment of panic when Throg was almost made main tank for an instance run made me realise that I have never practised with a shield didn't really know how to use one. Rather than practise in a group putting others at risk I decided to do some solo work with a shield first just to figure out what skills did and didn't work. I equipped a nice heavy shield that I got from Lothlorien quests and set off to the nearest orc camp to learn the ropes.

Observations from using a shield in Glory mode:

1. DPS is unsurprisingly way down. Instead of fervour's damage bonus you get glory's damage penalty and you lose the extra damage from the off hand weapon and you have far less power and fervour so you can't use the most devastating skills. All in all I reckon damage is probably half of what you can put out in fervour mode.

2. Survivability is way up. I found I could handle groups of 3, 4 and even 5 orcs and survive situations that would have been suicide in fervour mode. Initially this surprised me a lot. Taking into account the extra armour and the benefits of blocking, evading and parrying I was still taking damage at 2/3 of the rate of fervour mode. At first glance this does not sound like enough to compensate for the massive reduction in dps output.

The key thing I had overlooked was the impact of time. Compared to fervour mode fighting in glory mode feels like combat in slow motion. The extra damage mitigation means you last for longer which gives time for your in combat morale regeneration to make an impact and gives time for your self heal (bracing attack) to cool down and be used again. It even gives time time to drink a morale pot or two during a fight. The slower pace of the fight also makes it easier to pick and choose the right skills. To be honest I felt more in control than in a typical fervour stance fight against multiple mobs where it is a madcap race to kill them before they kill you.

3. You have to use low power low fervour skills. Happily MoM introduced some great new low fervour skills which make this far less painful than it used to be. I found that I could run a continuous cycle of Blade wall (traited to build fervour), Wild Attack and then either Feral strikes for a single target or Rend for multiple targets. Power does drain slowly but I had more than enough to last through 5 mob fights. For longer battles you could use power pots or the "on defeat" skill Second Wind to top up power. This rotation is self sufficient in fervour so Glory is building up one additional pip every 12 seconds in the background leaving you enough fervour for a heal with bracing attack every 30s or so. Note that most of rend's damage comes from a bleed over time so don't spam it while the bleed is still active.

4. On Defeat skills are very useful. These skills that can only be used after an opponent has been defeated are always nice but even more so when you are a bit short on power and fervour due to being in glory mode. Red Haze (extra fervour for the rest of the fight), Second Wind (a quick injection of power) and Blocking Blades (increased parry chance for the rest of the fight). The only question is what order to use them in. I tend to go for blocking blades followed by red haze followed by second wind because I don't really run out of power or fervour.

5. What about legendary Weapons? As this is just a test I used my standard third age axe that has +4% fervour damage and little else (it does have a small + parry I think). Obviously it would be better to use weapons and rune designed for glory mode - with increased glory damage, increased glory power and increased parry legacies.

6. So what about tanking then? Well this was all solo stuff just learning to use the shield so I can't claim to have learned a lot about real tanking. I know some of the the basics - grab and hold on to mob aggro, turn the mob away from the rest of the group, keep your back to a wall if necessary :), rotate between targets if necessary to keep aggro on multiple mobs. Most of a Champions threat comes from damage so I imagine the same skills would be useful. You don't have enough fervour to do lots of aoe though so holding multiple mobs must be quite hard. Perhaps battle frenzy could be used to fire off an attention grabbing raging blade and of course glorious exchange will help once you can use it. I imagine that using rising ire every so often to pull aggro from your healer would be a good idea (maybe use this instead of bracing attack).

7. Is a Champ with a shield and glory stance viable for solo play? It is viable in that you can kill just about anything that a fervour champ can but it takes a lot longer. I don't think its is worth it unless you are in a particularly dangerous spot, for example a goblin camp with lots of patrols and fast respawns. In fervour you might be able to aoe them down three at a time but let another ranged mob wander by to shoot at you from outside your aoe range and you will die quickly. Glory + shield will save the day in that situation. The extra trait slot at level 60 means you can have heavy shields traited without sacrificing too much so I will definitely be carrying one around from now on. One thing to watch for is mobs with self heal or lots of mitigation (some bosses). The low damage output from glory mode might not be enough to overcome their self heal.

8 What about (Ardour stance)? I am almost afraid to mention ardour stance because it is almost universally reviled among Champions and mentioning it on forums is a quick way to get called a nub but I actually think using ardour with a shield could work for soloing. Ardour stance gives you increased power, fervour and damage compared to glory but reduces your parry and evade percentages by quite a bit. It doesn't affect block however. I played with it for a while and I found that it was a useful alternative for handling large groups. It doesn't feel quite as safe as glory mode but you can kill things a lot more quickly. I am currently trying to level up an axe with ardour buffs to see how far I can push this.

Anonymous said…
Hey! I found this useful - so thanks for taking the time.

Curious what your thoughts are on the tanking one-handers... I've read spear is maybe the way to go for the extra bleed dps over time (mroe agro?)... dunno... kind of where you were before writing this. Just starting to play with champ tanking.
6:23 pm

mbp said…
Hello @anaonymous and welcome. I am taking a break from Lotro at the moment so my experiences may be a bit out of date. I did play around with a spear about a year ago but I soon abandoned it. the proc rate on the bleed was very low (perhaps one in 50) so the overall dps increase from the bleed was tiny. I think you will generally do better with a slow heavy hitter such as an axe or a mace. Many skills use the weapon damage as a base and these will do better with a slow weapon. Also you use less energy with a slow weapon because everything takes longer. This is important in tanking because you won't have the massive energy regen of fervour mode. As a dwarf I generally stick with an axe for the racial bonus.
6:58 pm