In Middle Earth No-one can hear you scream

Look who Throg bumped into in the depth of the foundations of stone: 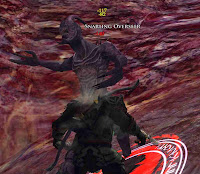 Certainly reminds me of this bloke: Alien

Not sure what chapter of Tolkien those guys come out of but Lore buffs need not be too disappointed. Right in the middle of the lake in the Foundations you come across a shard of a bridge.

This is none other than the remains of the bridge of Khazad Dhum that collapsed when Gandalf fought the Balrog. These then must be the very depths where that epic battle was fought. I haven't come across any other signs of the conflict yet but who knows?

There is a nest of those alien creatures on the eastern side of the lake in the Foundations of stone. Throg needs to get in there to complete two quests: Warding Runes and An Unacceptable Diet. While he can handle one or two of them with relative ease three or more is a challenge they all have special abilities (like spawing nasty darklings). Three times Throg has been overcome while trying to work his way in. I try to pull carefully but wandering patrols usually blunder by and jump me while I am in the middle of a fight. To make matter worse I sudpect I amn't even in the right spot. I get to a corner and my radar tells me the rune rock I need is above my head but I see no way of getting up.

Long irregular working hours have meant that my Lotro playing has been all solo this week. I can't commit to pre-arranged groups and I am usually too tired to inflict on groups anyway. Unfortunately this soloing is getting pretty tedious. If I want to keep interested in the game I am going to have to get back into group play and that means signing on for pre-arranged instance runs. I just need to get my self a bit more organised.
Email Post
Labels: lotro MMORPG

Anonymous said…
This is not the rune-stone you're looking for... <waves hand>

You're right, the rune-stone is located above you. There's a campfire very close to that location on the very south edge of the map. Once you find the camp, follow the path away from it (I think north) and hang a right to start climbing up a hill. The big rune-stone (and the other quest) are up there.

mbp said…
Thank you Deck! I was really beginning to despair of finding that Rune Stone. Every attempt to get to it seems to aggro half the aliens n the nest. I will look for that campfire and follow your directions.
9:09 am

I'll have to try to get to the bridge fragment! I didn't realize it was down there.
6:06 pm