Throg's Lotro Journal 27 May 2007: That's the last time Throg will trust a Shade.

It is usually considered polite for quest givers to give an indication of the difficulty of a task they want undertaken. For example they will let a willing adventurer know whether the adversaries they will face are likely to be more or less experienced than themselves and where the challenge is too great to be faced alone they will recommend that the adventurer bring a fellowship of willing companions.

Thus when the shade of Emelin asked Throg to defeat the Gaunt-Lord Brudhraw (In the Gaunt Lord's grasp) he took careful note before setting out that the quest was suitable for his level and did not require a fellowship. You may ask what our good friend is doing assisting a spectre but I can re-assure you that he is following a path set out for him by the eminent wizard Radagast the Brown.

Our dwarven champion became somewhat suspicious when he realised that the creatures he encountered on the way to Brudrhaw's chamber were all considerably more experienced than his own 28 levels. Nevertheless he pushed on until he came to the brood-lords den. Here is the sight that now confronts Throg: 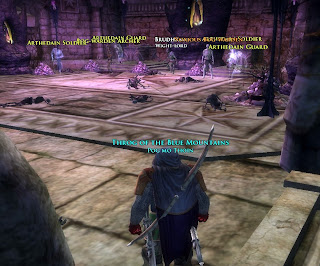 It may be noted that the Wight-Lord has no less than 6 attendants each one of whom is higher in level than Throg. Luckily the shades have not spotted him yet. Sometimes it is useful to be small in stature. Our hero hides in the shadows and ponders his best course of action. He cannot hope to triumph if he attacks alone yet should he decide that discretion is the better part of valour he will still have to fight his way out. Perhaps his best course of action is to stay hidden and hope to attract the attention of a passing fellowship. Happily Eriador is not short of adventurers these days and there is not a goblin pit or dragon cave that does not have a path beaten to it by bands of hopeful conquerors so hopefully our hero will not have long to wait.
Email Post
Labels: lotro MMORPG