Throg's lotro journal 22 May 2007: Sometimes you have to break the rules.

In the dim twighlight of Harangmar Throg and his companions spied on their intended target and considered their grim task. Radagast the Brown had asked for the sigils of gaunt necromancers in order to determine which lord these vile creatures serve (Breeders of the Dead). Unhappily these gaunt-men are powerful elite necromancers of 29th and 30th level each guarded by a group of loathsome wights. 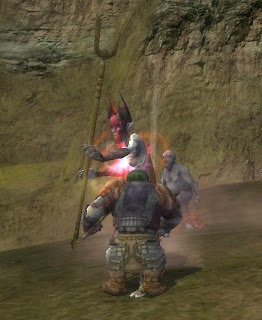 Throg thought of his uncle Halcin and the golden rules upon which the battle hardened fighter had placed so much stress. "Allow your guardian to taunt the monsters and absorb their blows while the minstrel keeps up his spirits with gentle lyrics" Throg remembered and also "The rest of the fellowship must concentrate all blows on one foe at a time".

This however was not a full fellowship. There was only Throg the champion (26th level), A guardian (33rd level), a captain (24th level) and his manservant. A near disastrous first attempt convinced the party that without a minstrel's tunes to reinforce morale their mighty guardian could not fend off the blows of so many while his colleagues took down the assailants one by one.

Desperate times call for desperate measures so the three chose to break the golden rules. While the guardian held a gaunt-man Throg and the valiant captain each pulled monsters off him and fought them in single combat. Throg's own armour allowed him to tackle two of the creatures at a time. With the attention of these lesser creatures distracted the guardian was able to mount his defences and survive the blows of the gaunt-man and his remaining followers. Once the lesser minions were dead all blades could be turned towards the necromancer to put an end to his vile sorcery.

The golden rules were broken but the battle was won none the less. Five gaunt-men gave up their existence and five sigils were returned to Radagast.
Email Post
Labels: lotro MMORPG