Throg's Journal 21 May 2007: What in Thorin's Name Happened Here

Less than a day's ride North of Bree lies the pleasant hamlet of Trestlebridge. Throg never made the trip during his first sojourn in Breeland so he thought to take some time out to visit. He was much taken aback to discover that the once tranquil spot had been devastated the night before in an Orc Attack. 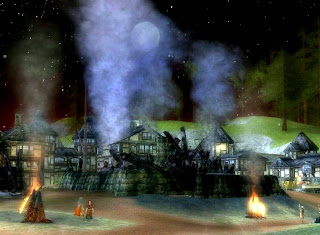 It was not alone the ferocity of the Orcs that cowed the residents but also some strange magic they wove which which seemed to conjure Thunder and Lightning from the very air itself.

Needless to say our fine dwarf's was not long a tourist for survivors of the raid sought his assistance in wreaking vengeance on these loathsome Orcs. In a daring lone raid on a neighbouring Orc camp our hero discovered a strange black powder which seemed to be connected with this mysterious Orc thunder. Then with the aid of a fellowship of adventurers he raided the Orcs again , this time destroying their stockpiles of the vile powder. Throg knows not what sorcery conjured this black stuff but it much pleased him to see the Orcs get a taste of their own medicine as the stockpiles went up with mighty conflagrations.

Tis a pity the The North Downs is so infested with Goblins and Orcs for it is a land of great natural beauty. A passing scribbler scratched this image of the hills for Throg to keep as a reminder of the spot. 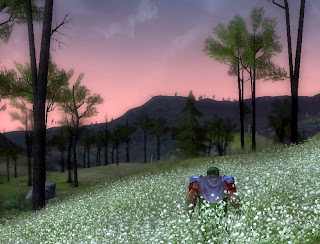 Yes it is very pleasant in that region, I had the opportunity to visit there shortly last week, I plan on venturing up there again as soon I complete the tasks I still have in the lone lands.

Speaking of the lone lands, it seems the quest, Well Prepared, has gained quite a reputation because of the long and tedious process of collecting stomachs from the boars, which surprisingly not all boars actually have, or if they do it is ruined beyond recognition before it can be taken from the body of the beast...

The good folk of the Lone Lands can be somewhat unreasonable in their demands. Throg wasted many hours collecting Norbog legs in excahnge for a helm that was no better than the one he already wore. It is rumoured however that Stanric, the collector of boar stomachs, has a number of powerful magical items including an earing with morale boosting properties. Perhaps he might be talked into giving you one of these trinkets if your meet all his demands.