Allods: A Summoner in XAES 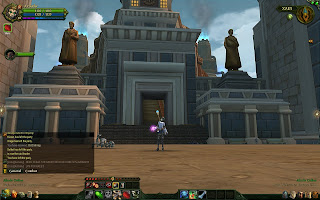 XAES is a level 10 instance for Empire players of Allods online. It contains the final quest in a chain of 5 "pilgrimages" that all new players get. The pic shows my summoner Arzuthr standing at the entrance to the main building (after we had cleared the place out).

The summoner is quite a complex character to play. At level 10 I have a powerful pet who can tank and does a fair amount of DPS.  I am also a healer who I can heal myself and others. On top of that I have spells that do direct damage and damage over time. That sounds like an overpowered combination but it is balanced by the fact that my spell casting is very slow - it takes several agonising seconds to cast anything. The net result is that my personal dps is very low (less than the pets) and my healing capability is similarly constrained. A second restraint on healing is that you need to store up "drops of blood" in order to cast heal and the only way I can generate drops of blood is using a slow casting offensive spell. I can store up to ten drops of blood but once they run out I need to go offensive again in order to recharge my healing ability. It takes a bit of getting used to  managing your pet and switching between offensive and defensive as the situation requires but it is a very flexible mix. At level 9, I was able to solo an equal level elite who dropped a very useful 75 silver.

I was the only healer on our XAES run and I found it hard enough to keep up with the pace of the faster characters. By the time I finished casting my slooow spells the mob would be dead and everyone moved on. The only time my healing was really needed was at the final boss. Nobody died during the fight so I can take some credit for that but it was frustrating to see the main tanks health drop precariously as I waited for my slow healing spell to cast.The instance itself was short (about 25 minutes) and there were no real surprises - standard tank and spank bosses with some wandering trash. We did encounter one bug - two invulnerable trash mobs that were stuck in a corner and prevented us from finishing one quest.

XAES represents a kind of graduation from the starter Empire city. This could be a natural breakpoint for me to leave the game but I am still enjoying myself so I think I will stick around for a while longer.
Email Post
Labels: Allods MMORPG

Draginfaerie said…
"We did encounter one bug - two invulnerable trash mobs that were stuck in a corner and prevented us from finishing one quest."

What I've done for this is to have the group pull the mobs (or just continuously beat on them) while someone runs in and grabs the quest item. You'll just have to repeat that a few times for everyone to get it.
9:19 pm

mbp said…
Thanks for the tip Draginfaerie - that makes sense.
9:25 pm