Me Me Me Me

So there's a meme doing the rounds which requires you to post the sixth screen-shot you have stored from any game of your choice. Thanks to Zoso I have been tagged so I opened my fairly slim Fraps directory to find there are very few games I have even grabbed six screenshots of. I have a bunch of lotro grabs and thats about it. Ah well for what its worth here is my sixt Lotro screenshot: 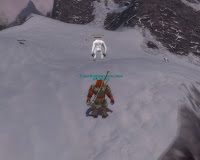 Why is Throg gazing fondly at that Snowbeasts posterior? Hard to tell but I can now reveal to the world the coded meaning of Throgs Kin name: Pog Mo Thoin. I didn't make it up but when I saw a bunch of guys runnign around under that moniker I knew they must be Irish and having a bit of fun with Lotro's name checker. I was in that kin for a few months and nobody ever complained.

Now who can I tag back? THis is always an embarasssing moment. How can I tag six people when I barely have six readers of thsi blog and most of those havce been tagged already. Well here goes and apologies if you have already been done by someone else DM Osbon, Thalian and Anton, Melf and Crimson, Khan
at February 25, 2009

Email ThisBlogThis!Share to TwitterShare to FacebookShare to Pinterest
Labels: blogging

I am currently playing FTL:Multiverse. This is a massive overhaul mod of the 2012 kickstarter hit FTL. The mod is enormous. It massively ex...