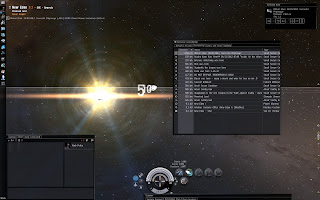 Gazing upon the glowing inferno which is all that remains of the wormhole that used to link the universe of EVE to the rest of humanity I could not help but wonder if it was worth coming to see it at all. Yes EVE-gate in the system of New Eden is the birthplace of EVE. The link to the home world of humanity from whence the gameworld is supposed to have been populated many generations ago. Today however the system is a lifeless derelict. The wormhole itself remains unapproachably distant even if it does outshine the system's weak star. The most interesting thing to see are the cans left behind by many visitors to mark their own personal pilgrimage to this most sacred site in EVE.

Several other pilgrims came while I was there and like thousands of others before them they set their MWDs to maximum and headed out to see how close they could get to the anomaly. Most give up after a few minutes. Some have persisted for hours. My scanner picked up one can 150,000km from the Stargate which is many hours of sub light speed travel. There were fewer cans than I expected on scan leading me to think that ccp may clean them up from time to time even though I spotted some l dating back to 2006. The older cans are not scannable from entry gate but can be scanned from the systems star for some reason.

Reflecting on the site itself however I realised that it is not CCPs' New Eden backstory that makes EVE special. The real lore of EVE is in the day to day interaction of the thousands of players and corporations who populate this game world. EVE gate may be the birthplace of EVE but it is not the centre of the game. Only one system can rightfully claim to be that centre: the most populous, most infamous solar system in the game and the next port of call on my EVE vacation: Jita.

PS: There are some other sights worth seeing in the systems leading to New Eden including this violent wormhole in Promised Land: 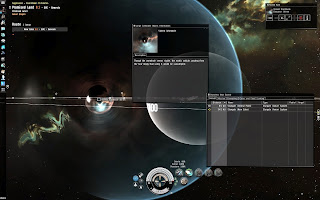 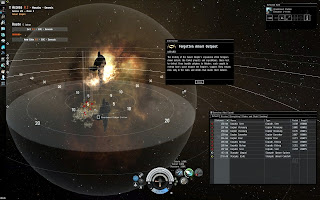 You don't really find ancient ruins like this in Minmatar space which makes sense since we have only recently won our freedom.

Van Hemlock said…
Enjoying these a lot! It's the sort of thing I think I should have done in my time there. For many reasons, I think I much prefer to *play* STO to EVE these days, but EVE remains as interesting to *read about* as ever.
9:16 am

mbp said…
Thanks VH. I don't know how long I can keep it up before my pod gets vaporised in some lawless region of space but I am enjoying being a travel writer for the time being.

To be honest it was about the only thing I could think of that would keep up my interest in the game as a solo player. Once I am finished my "vacation" I will probably need to choose between joining a coporation and egting involve din groupy activities or taking yet another long break from the game.

By the way Blogger's spam detection tool flagged you as spam. Your scandalous past is obviously catching up with you.
10:00 am

Anonymous said…
Unless CCP have an exception for the Eve Gate system then as of early 2008 all secured canisters get auto-deleted one month after last access time.

It's one of CCP's huge mistakes in terms of keeping players active. Persistence is right up there with sandboxing and single sharding in terms of the experience package that Eve delivers.

When your deep-space treasure trove just vanishes it's way uncool.

mbp said…
That would explain the relatively small number of containers that seem to be left @solbright. I wonder how the older 2006 containers survived (assuming they aren't just lying). Perhaps it is something to do with their location because I notice that these older containers are only visible from the sun and not from the entry gate.
7:35 am