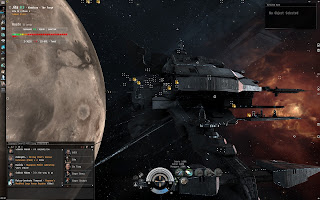 Welcome to Jita IV, Moon IV, Caldari Navy Assembly plant: the busiest station in EVE and by far the biggest trade hub. If it exists in the game then you can buy it or sell it in Jita. More than any other system Jita deserves the title of "Heart of EVE". It is a shining star of capitalism and purest manifestation of the thriving economy for which EVE is so rightly famous.

It is true that despite its high security status Jita is one of the more dangerous systems in EVE. Legions of suicide gankers queue up to pick off richly laden haulers on their way to market. Corps who engage in high sec warfare camp the system looking for targets and if you sit in front of Jita IV/ IV for more than a few minutes you are almost certain to see a battle or two. At least lag is much less apparent than I remember from my last visit four years ago. Five minute loading screens on undocking were the norm in those days.

Whatever threat a visit to Jita poses to your ship the threat to your unsuspecting wallet is even greater. Jita is infamous for its scam artists and Jita local chat is literally filled with bogus invitations to trade.

These scams are so old they are almost quaint. They are so much a part of the institution of Jita that I suspect the Caldari tourist board pays folk to  stand outside IV and IV and holler these old chestnuts into local chat.

Of course there is plenty of real trade going on too and there are plenty of reasons why a legitimate trader might come to Jita. EVE has other trade hubs but no other station can offer the same volume of trade and if you have a large quantity of goods to buy or sell or if you deal in unique or special items then Jita is probably the only place in the game where you can be sure of making the trade.In among the scammers I saw plenty of genuine contracts including Tech 2 Blueprint Original contracts for upwards of 50 billion isk. Fake Ravens and genuine BPOs are all in a days trade for Jita.

A lot of EVE history has been written in Jita and the protest monument nearby to IV/IV commemorates one of the more recent events. Originally a monument to  a long forgotten player competition it took on a new significance when it became the focus of massed player attention following unwelcome changes introduced to the game in 2011. The players vented their anger in game, on the forums, through the player council and perhaps most significantly by mass cancellation of subscriptions. CCP listened and took much of the players concerns on board in the more recent "Crucible" update but they left the ruined monument in game as a memorial to the strife. 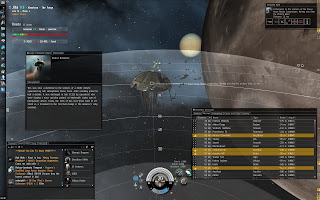