August 30, 2010
At level 63 Throg is about a third of the way through the soloable content of Mirkwood, nicely on track for the upcoming expansion to be released with free to play in 12 days time.

Although it is over a year old now Mirkwood is new to me and it is interesting to see how many of the subtle changes that previous expansions played around with have come together in Mirkwood as a unified whole. A players progress through through the Forest is driven by quests in a linear progression from hub to hub. As you finish the quest chains in one place you are directed to the next hub. Itemised quest rewards have been replaced entirely by collectable tokens. Tokens in various quantities can be exchanged for gear and consumables.

In considerable contrast to the radiant elven forest of Lothlorien, Mirkwood is a dark and dangerous place populated by Orcs and savage beasts. All of the quests I have come across so far have been solo-able but soloing still presents a challenge. Much of the action takes place in camps full of fast re-spawning mobs with random patrols. Individual mobs are no match for a player you need to keep your wits about you to avoid being overwhelmed by adds. This type of content can be soloed but there is ample incentive to group up in order to reduce the danger and speed up progress.

Case in point is the Morrival infested castle of Dannenglor. This crumbling ruin teems with vicious harpy like morrivals. Most of them are paired off so you cannot take them one at a time and an abundance of fast re-spawning patrols means that you can easily find your self fighting three or more of these at a time. One of the most common types called the Morvul Slave is a hard hitting mob that does a tonne of shadow damage which is not mitigated by armour. To me these feel way overpowered for a normal level mob and Throg's first attempts at breaching the castle ended with him running for his life.


There are nine quest to be completed in there in several chains which require repeated entry so I persevered and eventually with much careful pulling and a lot of wall hugging finished them all. Picture of me tacking the final boss mob as proof: 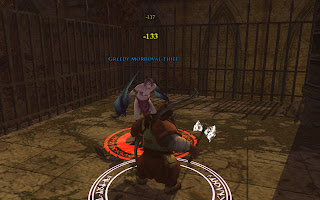 Anonymous said…
I really hated Dannenglor when I first encountered it, but I have to say that it's a bit of a rite of passage on my characters now, and I try to see it as an interesting challenge. It still makes me want to thump my keyboard on occasion though.
8:05 pm

mbp said…
The shadow damage those slaves seemz to go right through my heavy armour. I wonder if non armoured classes have an easier time of it. Lore Masters anti-Shadow Raven buff would be handy I think.
8:16 pm