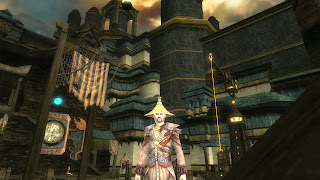 I am pleased to announce that Autwind Horogood has put his study of the arcane arts to good use and has freed the citizens of Korthos Island from the icy grip of a Sahuagin controlled dragon. Released from the control of a Sahuagin mindflayer (Misery's Peak Mission) the dragon lifted its siege of the island bringing sunshine back to Korthoses shores and permitting ships to travel once again to Stormwind.


Again I am reminded of Guild Wars. Just as in Guild wars completing the beginner quest arc opens up access to the rest of the world and also brings about a seismic change in the landscape of the starter zone. Unlike Guild Wars however it is still possible to go back and redo starter zone quests on the "sunny side" as the post dragon version of Korthos is known. Just as well, even though I have done many of the quests on hard at this stage it may prove useful to go back and do them on expert mode later in order to farm favour (the reputation grind of DDO).

PS: I would like to say that the title of this post is a clever literary reference to the fact that excessive mmo playing can interfere with your sex life but I am afraid I am neither literary nor clever enough to carry that off.
Posted by mbp at 10:55 pm

Awesome, I need to get our instance group past Korthos soon :P

Hey, I have a hat like that! It looks more appropriate on your Mage than on my Ranger, though. ;)