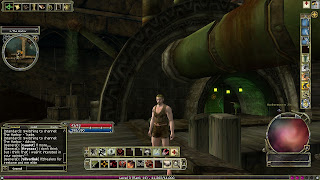 You may wonder why Autwind Horogood, that precocious scholar of the arcane arts, is running around Stormreach in his underwear. If you are astute you may even have noticed the distinct lack of an imposing wizardly staff in his hands.

How has this sorry state of affairs come to pass? Oozes. That is what has led to this.  Squelchy slimy fetid oozes.

Autwind is working his way through a quest arc set in the Kobold infested tunnels of Storm-reach waterworks. Things went well enough for the first couple of missions and large numbers of Kobold were slaughtered.The third mission is set in Clan Tunnelworm's lair and these particular Kobolds are rather remiss in their housekeeping. The lair is filled with rapidly respawning grey oozing creatures. Not only are these oozes immune to my fiery magics they also exude an acidic slime which dissolves weapons and clothing. One minute Autwind was a powerful wizard commanding terrible arcane forces,the next minute he was standing in his underwear looking at the broken fragments of his staff. Autwind managed to complete the instance anyway with the help of his trusty hireling cleric but running around naked in a dangerous lair is no fun.

The repair bills for this are probably going to bankrupt me. I have already spent most of my cash learning new spells (surprisingly expensive by the way) and I amn't getting enough loot from these missions to cover the repairs. This may indeed mark the end of my career as a solo adventurer. Its not just that the missions are getting harder it is also that the economics of DDO seem to be firmly stacked against soloing. Most of the loot from an adventure comes from chests and quest rewards. As far as I can tell these are independent of party size. No /roll is required here, everybody gets to loot the chest. The solo adventurer takes longer to complete a mission and has a much higher repair bill but only gets the same rewards.

Stabs said…
What server are you on my friend? I'll help you farm a couple of Muckbanes and you can keep one and sell the other for enough wonga to keep your clothes on.

mbp said…
Hi Stabs. My Wizards name is Autwind Horogood on the Thelanis Server. You offer is very generous but remember I am playing in europe - my typical playing slot is 10pm-11:30pm GMT. If you have a character on that server drop me a mail - I have yet to meet up with anyone I know in game and it would be fun. Don't worry too much about the muckbane though. I have my eye on a wizard spell which specifically targets oozes. That should show the b*ggers.
10:01 pm

Elric said…
Hi, mbp. As mentioned by Stabs, the most effective way to dispatch oozes and slimes is to get the mace Muckbane from the chest of a named ooze called Muck in the dungeon Durk's got a secret. I'm now level 7 and I'm still using it regularly.
8:57 am

mbp said…
Hello Elric, that sounds like a useful weapon alright. The oozes aren't that hard to kill with normal weapons but the damage to your equipment is very annoying.

I must admit it made me chuckle though that my clothes actually disappeared when they got damaged. In most games you can still wear broken clothes for the sake of decency even if you get no benefit from them.
9:22 am

Modran said…
This happened to a friend's sorceress during one of our run. You can imagine the comments on TS when the party now had a drow woman in underwear.

What was she doing meleeing oozes in the first place? Isn't a sorceress supposed to stand at the back out of the line of fire? I think you might just have an exhibitionist in your party :)
2:07 pm

Stabs said…
My Thelanis character is Drowlette. I've added you to friends and I'm sure I'll bump into you at some point.

The character I'm playing most is Lemmy on Orien if you fancy giving the new server a try (opened last Thursday)
5:04 pm