December 13, 2008
Throg joined a Kinship group for the Forgotten Treasury instance last night. It was an enjoyable change from the solo questing that the now level 55 dwarf champion has been mostly doing so far in Moria.

Some members of the group had tried and failed to clear the Treasury before so we knew it would be challenging but we were lucky enough to have a well balanced group with Guardian, Minstrel, Lore Master, Hunter, Burglar and Champion (Throg). Throg (level 55) and the minstrel (53) were both below the 56ish level of the instance but the others were all higher so it more or less balanced out. 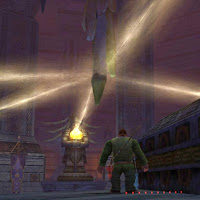 [SPOILERs ahead]
It is a well designed enjoyable instance set in a circular chamber with balcony around. As you enter, a boss absconds to a locked side chamber with his treasure leaving the fellowship to clear trash ringed around the balcony. Once the trash are cleared you have access to a puzzle which must be solved in order to open the locked door. Clearing the (including six mini bosses) also gets you drops for several side quests but there isn't enough to go around so we had to do a second run to get all the drops we needed.

The puzzle involves rotating six statues in the correct order in order to illuminate a central pendulum which opens the door. Each statue is turned using a wheel on its balcony mounted pedestal but turning any wheel out of order resets all the statues. The order seems to randomly change on every run of the instance so a bit of trial and error is required to get it right.

In a chest beside each wheel you get either a yellow or blue crystal shard. These are needed in the following boss encounter so make sure they are spread around the fellowship.

The first boss waits in his side chamber. He has two main abilities that must be overcome. Every 30 seconds or so he changes from corporeal form to ethereal form in which he has huge damage mitigation (90% I think). This change can be delayed by using one of the yellow crystals which will extend the timer for his corporeal form. Each crystal is on 5 minute cool down so spread them around the fellowship. The boss also has a series of nasty debuffs that get applied to random members of the fellowship. These debuffs are announced by an eye over your character's head so you can avoid them by getting out of line of sight but they can also be cured. The most serious debuff seems to be a wound which does 500 damage every 2 seconds so it is vital to avoid or cure this. Our LM was able to cure it and we didn't have to run out of line of sight but other have reported that this can be a killer. We never got to use the blue crystal shards - these say that they extend ethereal form but we could see no reason why you would want to do that.

Exiting the side chamber after killing the first boss you run into twin Troll bosses. This is a tough encounter. Not only do these guys hit hard but when they get close together they get even stronger. Keeping them apart is very difficult because they seem to share aggro and damage in some fashion that we couldn't quite work out. As if that wasn't enough they have some kind of progressive debuff that gradually lowers every member of the fellowships maximum health (at one stage Throg's maximum helath had dropped from over 4000 to less than 200!). We tried rooting one and tanking the other away but it didn't work. We tried using two tanks to hold the trolls on opposite sides of the circle but the shared damage made it almost impossible to control aggro. The one useful thing we discovered was that the progressive debuff goes away in the little side chamber so we pulled the trolls in there but of course it became even harder to separate them in this little room.

We died many times (dropping out for repairs at one point) but eventually we killed them by kiting them around the little room and hitting the running trolls as best we could. Since they do melee damage this kiting works but it was a very slow process because its is very hard to land hits on a running troll.

Our method though effective was very inelegant. I am sure we are missing something. Perhaps with precisely balanced tanking we could have kept them apart but I have no idea how you would manage this. I am also curious about the blue crystal shard which we never got to use. Could they do something for this encounter?

After killing bosses we got to loot their chests. Mainly legendary weapon upgrades but there were a few pieces of armour. Throg got a cloak with +might, + morale that will suit him nicely at level 56.

Thallian said…
Neat mbp :) You are way ahead of me as I am waiting for my bros to explore Moria with me.
5:09 pm

mbp said…
You'll love it Thallian. Moria is much much more than I expected and full of surprises. Just the other day I stumbled across a lush green garden under the mountain!
10:16 pm

mbp said…
You'll love it Thallian. Moria is much much more than I expected and full of surprises. Just the other day I stumbled across a lush green garden under the mountain!
10:16 pm

Anonymous said…
Very good description of your encounter. I have bookmarked this post to reference when my Kin goes into the Forgotten Treasury for the first time (maybe as early as this weekend!). We will have a mixed bag of levels as well; I'm almost 54, we have a 54 hunter, 52 hunter, 60 Guardian, and 60 Minstrel. I'm also a 40ish gamer dad that has started blogging if you are interested :)
5:49 pm

mbp said…
Hello Bravsirrobin. Always nice to welcome a new blogger. I will head over and say hello :)
6:33 pm

Anonymous said…
Thanks to your guide, our group managed to complete Forgotten Treasury last night. We had a 60 Guard, 60 Minst, 60 LM, 55 Hunter, 54 Hunter, and my 55 Burglar (first time there for all of us, first time grouping in a LOTRO instance for a couple of us). Using the yellow crystals didn't do anything that we noticed, I have read on the forums that it sometimes bugs out. The first boss took 3 tries, we just outlasted him since the crystals didn't work. The Troll Bosses required two attempts and many, many deaths (retreat and run back to the fight) but we finally got them down too. It was a great learning experience and we had a wonderful time. The 1+ gold repair bill was a little shocking though :)
1:47 pm

mbp said…
Big congratulations Bravesir. It is a tough tough instance, I think everyone comes out of there with a savage repair bill. Its a pity the yellow crystals didn't work, they worked for us when I did the instance.
2:24 pm

Dishwashere said…
Just a tip:
the order in which to turn the statues is random for each run indeed, but when you enter you can observe in which order they are turned off. Turn them on in the opposite order to solve this puzzle.

The two trolls are the main cause of bad repair bills though. No smooth tactic found for those yet.
2:16 pm

mbp said…
Good tip Dishwahere. I am still amazed that there is no solution to the troll issue. I really thought the blue crystals might be useful but it seems not.
6:20 pm

J.P. said…
You have to keep the trolls apart. Put a tank, or high aggro on each one, pull em apart. Keep hunters/minsts/LMs out of the way. At least that's how we just did it.
Hunter may be able to hit from the steps or higher up.
3:08 am

mbp said…
Hi JP, thanks for the comment. Its been a while since I did the Treasury with Throg. I have a vague memory that the trolls seemed to be aggro linked - making it very tricky to double tank them, if one tank aggro'ed his troll more than the other tank then that tank would end up with both trolls together. but I am levlling up a new LM alt so I should get another chance to do it soon. This time hopefully we can be a bit more scientific about it.
10:12 am

Anonymous said…
Inelegant but effective way to kill the twin trolls: main tank takes uruth and all the others nuke skum as hard as they can.
6:25 pm

mbp said…
Hi anaonymous - that method is no less elegant than kiting them around the room as we did (I think our minstrel actually did the kiting!!!)
10:03 pm