Back in 2014 I wrote this post cataloging the gaming GPUs I have used over the years. Its been eight years so I think it is time I did an update.

2014 GTX970.  At €310 this represented a step up in what I previously paid for graphics cards. Partly this came from me being a bit older and willing to spend a bit more money on my hobby but also it reflects the fact that gaming in general and PC gaming in particular was getting more expensive. For many years 30 frame per second  was considered playable while 60 frames per second at 1080p was held up as the holy grail of performance. By 2014 however the envelope of desirable performance was being pushed hard on multiple fronts: 4k gaming, ultra high frame rates and even virtual reality demanded significantly higher levels of CPU and GPU performance.  The €310 GTX 970 was only the entry level of the "enthusiast end" but it still managed to deliver high quality gaming at good framerates for the next few years  years.

When I first looked to looked to replace my GTX 970 a couple of years later the demand from crypto currency mining had pushed prices beyond what I was comfortable to pay. I opted to buy a new adaptive sync monitor instead. Adaptive sync solves the jerkiness that happens when a graphics card is no longer able to keep up with the frame rate of a conventional fixed frequency monitor. My Dell 2417DG with Gsync allowed me to enjoy a smooth gaming experience in 2017 even though my GTX 970 was no longer able to deliver a solid 60 frames per second at 1440p in new titles such as Battlefield 1 and Total War Warhammer.

2017 GTX 1080. In November of 2017 I eventually tired of waiting for the GPU market to recover and bought a second hand GTX1080  for €460. At the time I thought this was outrageous but given what happened later it feels like a bargain in hindsight. The GTX 1080 was a genuine high end card and freed me from performance worries for several years. I spent a lot of time playing Total War Warhammer 1 and 2 in those years which looked very nice on decent hardware but the card was able to still able to deliver enjoyable experiences in graphic intensive 2019 games like Control and Metro Exodus.

In the normal course of events I would probably have replaced the GTX 1080 with one of the newer RTX cards some time in 2020 but there was nothing normal about 2020. The global Covid 19 pandemic caused massive disruption in global supply chains. With many people trying to work from home just about every type of PC component was in short supply. It took me several months to get a reliable web cam for my desktop PC. The GPU market took this to another level however with supply side shortages being compounded by increased demand from a resurgent cryptocurrency mining sector. For the next two years it was impossible to buy a GPU at anything near recommended retail price. Scalpers sold any gaming capable card for 200-300% of retail price and miners happily paid that knowing they could earn it back with crypto. I paid €460 for a high end GTX1080 card in 2017 and felt it was expensive. The spiritual descendent of that card,  the RTX 3080, released in September 2020 with a RRP of $699. For most of 2021 however the actual street price of the card was over $1600. Nvidia themselves even tried to cash in in January 2022 by releasing a slight refresh of the RTX 3080 at a significantly higher RRP of $999.

Thankfully my GTX 1080 was still able to handle any game I wanted to play but after five years I really wanted to upgrade it.

January 2022 RTX 3060ti. I am reconciled to having to pay considerably more  for gaming hardware for the next while but I am still not willing to pay 2 to 3 times RRP for a card. A seemingly fortuitous circumstance came about however which offered an opportunity for me to get my hands on a new GPU without paying the scalpers. My wife needed a new PC for her own use.  She is not a gamer but she is an enthusiastic photographer and needs a fairly powerful and flexible machine to support this. Rather than build her a custom machine we bought a Dell OptiPlex with a powerful i7 processor and enough slots and ports to fit the accessories she needs (2 monitors, Wacom tablet, Several internal disk drives, external hard drives, screen calibration tool, external card readers etc. The Dell also came with an RTX 3060ti graphics card. We paid €1300 for the PC and the street price of the RTX3060ti was €800 at the time so this was a pretty good deal.

Did I mention that my wife is not a gamer? Anyway to cut a long story short the RTX 3060ti ended up in my gaming PC while my wife was happy with an old GTX 1050ti I had picked up along the way. The RTX 3060ti is a mid range card in theory but is still a significant upgrade over my old GTX 1080 and supports new technologies such as DLSS and Ray tracing. I even managed to sell my GTX 1080 for €435 which is rather impressive for a five year old card.

April 2022 GTX 1050ti. It would be nice if the story ended at that but sadly there is another twist in the tale. My wife's new PC started crashing intermittently. Every few days it would just hang and would need to be rebooted. It was one of those infuriating problems that was infrequent enough to be very hard to track down but still just frequent enough to be a nuisance. An entire week could go by without a problem and then it would hang several days in a row. Dell's own diagnostic suite is quite thorough but they do no long term testing and found nothing wrong. I started a campaign to try and nail down the problem. Firstly I determined that if I left the machine running for ten hours or more it would more than likely hang regardless of what software was running. With this in mind I tried swapping out components to see if I could narrow down the source of the crash. Swapping the ram from my machine to my wife's machine seemed to run well for about a day but then the machine (my wife's) finally crashed. Ram is not the problem. A couple of days ago I replaced the GTX 1050ti with the original RTX 3060ti. The Dell  machine has been running for over 48 hours now with no sign of it crashing. On the other hand the GTX 1050ti has been running in my own PC for a similar period and it hasn't crashed either. It is still a bit early to draw a definitive conclusion but perhaps there is some marginal incompatibility between the GTX 1050ti and the Dell. I did come across a similar situation about twenty years ago when a particular graphics card crashed in a particular mother board despite the fact that both worked fine with other parts. I will leave the test running for  at least a week before I declare the problem officially solved.

So where does this leave me? I sold my GTX 1080 so if it turns out that my wife really needs the RTX 3060ti then I am left gaming on the GTX 1050ti for the foreseeable future. GPU prices are falling slowly so I expect to be able to pick up a new card at a reasonable price by the Autumn. In the meantime I will soldier on. The main games I am playing at the moment are Slay the Spire, Monster Train and Borderlands 3. None of these need high end graphics. To be honest I will be happy to have solved my wife's problem.

Back in 2014 I plotted my GPU history on Toms Hardware GPU Hierarchy chart. I have tried to do the same on the latest version below. You can't directly compare this chart with the previous version but one point of reference that Tom's Hardware give is the legacy GFlops list. The HD 5850 I got in 2011  delivered  2,088 Gflops. In 2014 I replaced it with a GTX 970 rated 3,920 Gflops. My recent RTX 3060ti had 16,197 Gflops but the GTX 1050ti I am currently reduced to is only 2,138 Gflops. I have stepped back 11 years. The image below is based on tomhardware.com GPU hierarchy 2022 see original here: https://www.tomshardware.com/reviews/gpu-hierarchy,4388.html 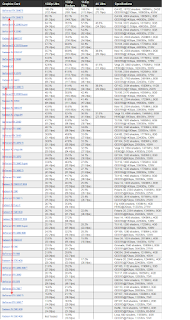 Email ThisBlogThis!Share to TwitterShare to FacebookShare to Pinterest
Labels: Computers

Apparently I have a coffee problem

A couple of weeks ago my wife alerted me to the fact that I had developed an occasional odour problem. This surprised and distressed me som...