My trusty Radeon HD5850 has served me well since 2011 but the time has come for an upgrade. I have long been a fan of Tom's Hardware recommendations and the Nvidia GTX970 which offers great performance  with low power consumption is tempting me at the moment..The  video card performance hierarchy chart at the back of Tom's guide sparked a bit of nostalgia so I have used the chart to plot the cards I have used over the years to power my gaming hobby.

Here is my personal video card history (all credit to Toms Hardware guide http://www.tomshardware.com/t/graphics/ for providing such a useful chart): The image is large so be prepared to zoom in and pan around a bit.

EDIT: Graphic now fixed. It was harder than I thought it would be to convert a large table in Word into a picture file. 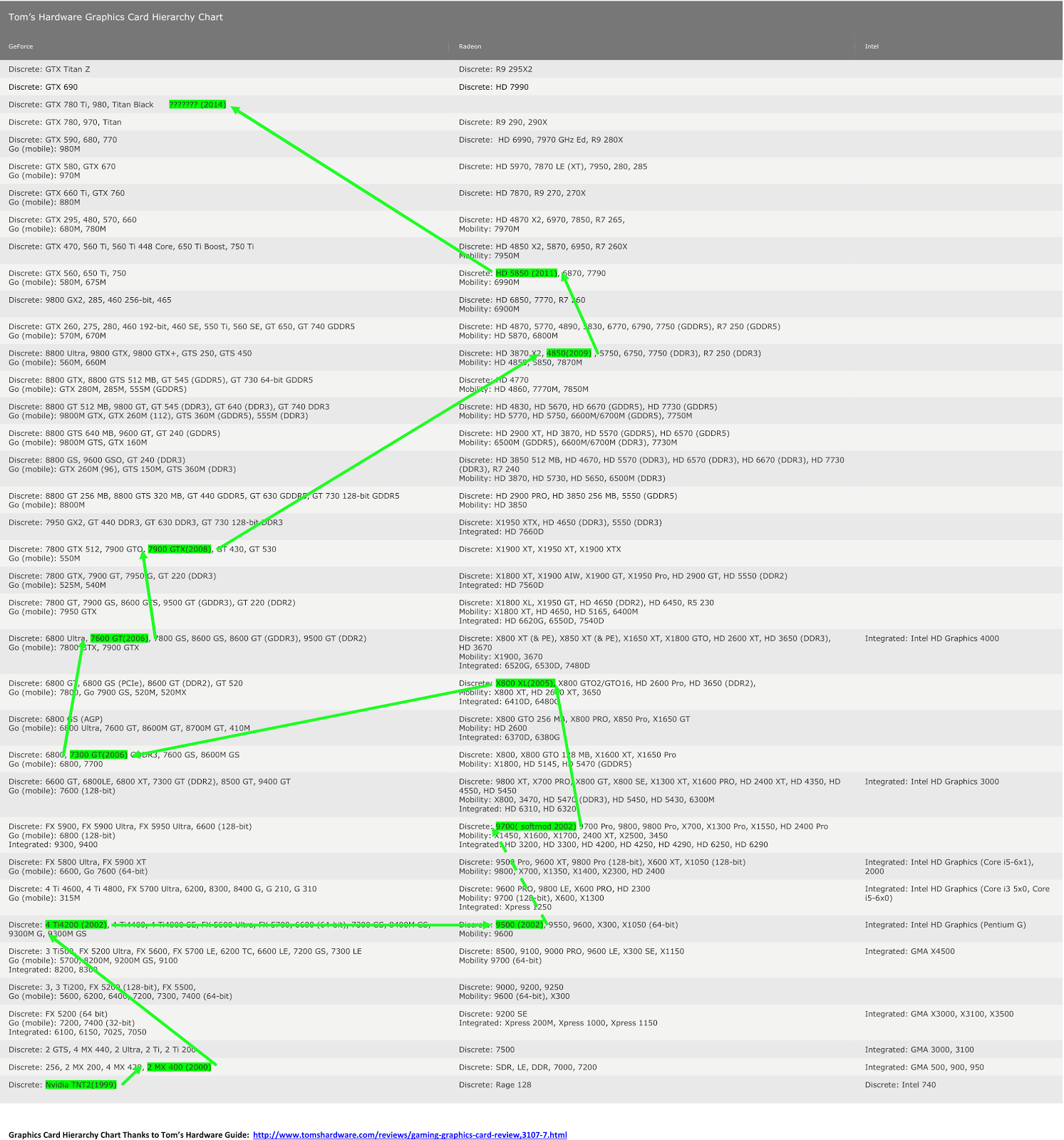 The dates are the years that I recall acquiring each card which is not always the year that model came out. Some allowance has to be made for hazy recollection but I think they are broadly accurate.

1999 TNT2 32MB: My first real graphics card. What a step up from software rendered heavily pixelated games of he mid 1990's to hyper-realistic smoothness of  Half Life and Home World.

2000 Geforce 2 MX 64Mb: A budget card but still a good step up. This had hardware transform and lighting and the large memory gave it some longevity.

2002 Geforce 4200 64Mb. A highly regarded card bought for my first self built PC. Sadly an incompatibility with my chosen motherboard meant I couldn't get it to work properly. I returned it for a refund and held on to my 2MX for another few months.

2002 Radeon 9500 128Mb soft-modded to 9700. This is the stuff of gaming legend. Some particular variants of the budget 9500 card could be tweaked in software to double the number of pipelines effectively turning the card into a much more expensive 9700. It didn't work for everyone but it did for me. The resulting soft modded card was good enough to power my gaming for three years.

2005 Radeon X800 XL 256Mb This was a lovely card which outperformed anything else in its price range but my Asus branded version proved very unreliable. It failed after six months and I got warranty replacement. The replacement failed again just out of warranty. Asus's customer support was less than impressive.

2006 Nvidia 7300GT DDR3 128 Mb This was a cheap stop gap replacement for my broken X800XL. The 7300GT was a budget card but I managed to get a turbo charged DDR3 version which gave excellent performance for the price.

2008 Nvidia 7900GTX 512Mb. This was a $500 monster, the fastest card on the planet when it was released in 2006. I bought a second hard version a couple of years later and it was still able to keep up with contemporary  mid range cards.

2009 Radeon HD4850 According to Tom's chart this is the biggest performance leap I ever made, a full seven rungs up the performance ladder from my previous card. It was a very nice card but I don't remember getting the same wow factor that I got from my very first TNT2 or my 9500 to 9700 Softmod.

2011 Radeon HD5850. This model had been out for some time when I bought it for a ridiculously good price (€150 if I recall) in 2011. Even a year after initial release it was still competitive with more recent cards and actually outperformed its nominal successor, the more expensive HD6850. I still have this card and it has not let me down but now in late 2014 it is time to upgrade from this five year old design.

Unknown said…
Really its interesting... Thanks for sharing with us..
graphics cards south Africa
6:43 am