The Lure of Completion

September 20, 2010
I love finishing things. In single player games there is generally a final boss to be overcome and no matter how cheesy the closing cut-scene I find I can walk away with a warm glow knowing that I have completed the game.

Completing things was pretty much the theme of my weekend in Lotro. On Friday night I had the help of a kinship group to complete the quests in Volume II book 6. In this book the hard pressed dwarven expeditionary forcein Moria were forced to ask for Eleven help to suppress the evil that has taken over the once great dwarven stronghold. With considerable effort on Throg's part the elves of Lothlorien agreed to help not because of any love of dwarves but because they realise that the evil has to be countered and they hope to find out what happened to the great wizard Gandalf (Mithrandir in the Elven tongue) following his battle with the Balrog Durin's Bane.

Vol II book 7 was easy enough to complete solo and with the aid of a combined force of elves and dwarves we managed to capture Mazog the vile leader of the Moria orcs. The screenshot below is from book 8 but it is the same Mazog trying to escape. 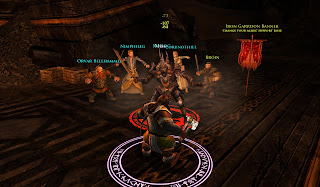 Finishing book six also earned Throg the legendary skill Deathstorm. This sparked another bit of completionism as Throg now lacks only one legendary skill. The final legendary requires kindred reputation with the Iron Guards of Moria and given my feeling about grind it isn't surprising that I put this off for so long. Neverthesless I made a determined effort to get the rep required over the weekend. Thankfully Turbine have included a number of ways to earn reputation. Perhaps the most efficient are a couple of solo dungeons in Hadubab (Durins way) which give a hefty chunk of rep but can only be run once a day. Some quests also give reputation so I got a further boost from a quest arc in the East of Durin's way involving a Morroval Queen who has nefarious plans for the corpse of Durin's Bane. Although the quests didn't give as much rep as I hoped I did get a few rep item drops which helped me on my way. As an added bonus killing all those morrovals helped completed a deed which raised my innocence virtue to the cap of 10. Score another point for completeness. I draw the line at killing random mobs in the hope of getting rep drops however so I didn't actually complete the rep grind yet. I am prepared to wait a few days more running the dungeons when they are available for the final few points.

The final legendary I seek by the way is called Continuous Blood Rage. Its a kind of Berzerker mode which makes a Champion virtually unstoppable and ramps up damage over time but has a very high morale (health) cost and makes you virtually unhealable. Everything I have read suggests it is a suicide skill that I will probably never use but hey,  completeness is its own reward.