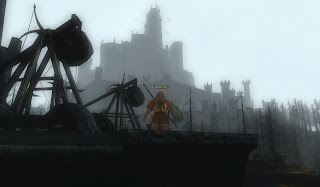 Sauron's fortress of Dol Guldur dominates the skyline of Eastern Mirkwood. It is from here that the evil one sends his forces to attack the Elves of Lothlorien. Now the tree dwellers are fighting back and the army of the Malledhrim is massing in Thangulhad to assault Sauron's vile stronghold. The dwarven champion Throg is pleased to note that for once the Elves have set aside their usual tactics of trying to defeat orcs by singing to trees and picking berries in favour of more traditional means of assault using iron and fire and large rocks.  He is particularly gratified to see that they have called on the support of dwarven siege engineers who are no doubt responsible for the impressive looking catapults you see in the picture.

Dol Guldur is currently the "End Game" of Lotro. Home to the hardest bosses living in the toughest instances with the most onerous entry requirements. When I first caught sight of the place I was impressed both by the massive forbidding fortress itself and the bustling Elven war camp in its shadow. I decided to go up for a closer look, not expecting to get very far with my lone level 64 dwarf. Surprisingly I managed to walk all the way into the fortress and right up to all of the end game instances. There were plenty of high level orcs around but no bunches so it was easy to tackle them one at a time. I only saw two elites on the whole journey and both were easily avoided. I walked on past the warg pens, past the dungeon, past the sword hall, past Sammath Gul past all of the end game instances of Lotro right up to the final Raid instance of Barad Guldur. In fact here is Throg smiling for a photo in front of the first two Mobs in the raid instance: 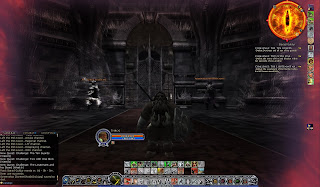 The fact that a lone player, not yet maximum level can casually saunter up to the hardest dungeons in the game shows just how much the design philosophy of Lotro has changed since first release. The dungeons themselves are still tough group encounters but every where outside the dungeons is soloable. Contrast this with the original Lotro: a defining feature of Shadows of Angmar was that large parts of the world were effectively off limits to solo players. Regions like Dol Dinen, Carn Dum and Barad Gularan were populated with dangerous groups of elite mobs that effectively made them no go areas for solo players. The journey out to the Rift of Nurz Ghashu raid instance was so treacherous that even raid groups tried to avoid it by porting in players if at all possible. How times have changed.