Here are a few random screenshots I took to give a flavour of combat in the game: 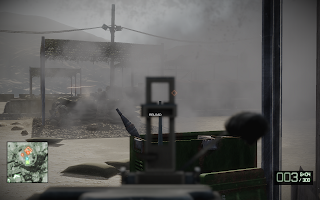 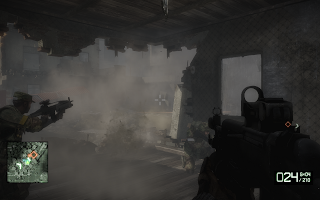 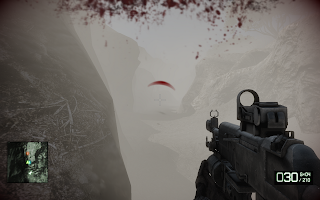 I promise you there are enemies in each of these shots and we are under fire. I did say it was the smokiest game I have ever played. I am not quite sure I buy into this "not being able to see" as an entertaining game-play mechanic but I am enjoying the campaign so far none the less. The game seems a bit more fast paced and arcadey than I remember Call of Duty to be but is still a lot of fun. I have encountered a few bugs though including one where an entire map full of enemies decided to ignore me despite my pumping bullets into them. Restoring a saved game fixed this bug but I am surprised that such a serious bug is still in the game. I am looking forward to a bit of multiplayer fun once I finish the single player campaign.
Posted by mbp at 10:42 am

Is there a setting in the Options Menu to turn down the level of smoke/dust?

I couldn't find it Cap'n John. All they have is a single quality setting. Even on low quality there is still plenty of smoke it just doesn't look as pretty.

Its still a very enjoyable game mind you. I have finished single player and I have played a few multiplayer matches. I completely suck of course but it is still fun.