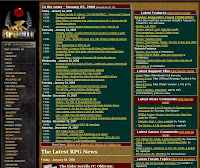 RPGDot's massive archive of news, reviews, guides and forums was "the place" to go for computer rpg information back in the days of Morrowind and Gothic. I was dismayed therefore to discover that the site and its daughter sites closed down completely earlier this year.

Like many others I have more or less abandoned any effort to keep private copies of information, trusting instead that I can get the information I need when I need it from the internet. My precious book collection was a long time hold-out but even that has become disposable. The closure of a well loved site is a jarring reminder of how impermanent the internet really is. Is it time to panic? Should I go looking for my books back?

Of course I am not the only one who worries about the loss of digital information. The following article by Susan K. Soy of Univertisty of Texas asks "Will Permanence Exist in the Digital Age". Susan's article led me to the Internet Archive, a project which attempts to preserve historical web pages and make them avalaible through its Way Back Machine. Laudible though this goal may be it sounds a bit like trying to save the ocean in a bucket. Putting it to the test I did find copies of rpgdot.com that were archived over the years but only the front page appears to have been preserved. All the juicy sub-pages with their precious information seem to be lost forever.

It is not all bad news however. Much of the information from RPGdot is scattered over other game related sites and may be tracked down using the power of Google. The community which ran RPGDot have moved on to a new site called rpgwatch which may grow over time to fill the gap left by the demise of its fore-runner. Some stuff has been lost forever though including the irreplaceable forum archive without which I would probably never have managed to finish Arx Fatalis.

What is the rational response to the realisation that we are now totally dependent on the internet but the internet itself is not as permanent as the media it has displaced? Should we opt for paranoia, keeping backed up private copies of all the information we use or should we fully embrace the new information age in all its transience knowing that anything which is lost is likely to be replaced and even improved upon many times over?
Posted by mbp at 9:59 am