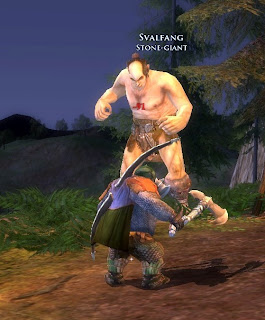 It puzzles Throg why big folk are so frightened of giants. Dwarves are used to dealing with those of larger stature than themselves and in truth a dwarf is like to give a Giant a tougher fight than either elf or man. While the dwarf hacks at the giants knees the behemoth must bend near double if it hopes to land a blow on the dwarf.

Such thoughts no doubt influenced the ranger Amlan when he asked our good dwarf to deal with a troublesome giant who had taken to waylaying travellers in the Brandy Hills (Giant Problems ). Throg was quick to accept the challenge. Indeed he had already encoutered Svalfang while retrieveing Dob Sandheavers pack (Big Problems ). On that occasion Throg had been forced to hide from the gargantuan so it warmed a dwarf's blood to think of tackling the creature head on.

Throg set out in the company of a doughty kinsman burglar. They marched across the Bree fields and over the Brandy hills to Svalfang's forest abode. It was clear for all to see that this was a dangerous pair and the motley crew of beasts and brigands that prey upon less hardened travellers had more sense that to trouble them.

Spying Throg the foolish Giant let loose a thunderous guffaw of mirth when he saw who came to challenge him. His mirth was short lived though for Throg's companion had stealthily crept up behind the giant and then sunk his daggers deep into the creatures back. Svalfang roared in pain and swung his mighty club in attempt to crush his attacker. Stength alone is poor counter to speed and guile however and wherever Svalfang looked for his foe there was no one there.

While the burglar kept Svalfang beguiled with slippery trickery Thorg set to hacking at the giant's legs. It was much like felling a stout oak tree but swinging an axe in each hand Throg hewed away like a timberjack. Before the giant realised his peril his felt his battered legs give way and he crashed to the ground. This was perhaps the most dangeous incident in the fight for Throg and his companion were almost caught underneath the crushing weight. Once downed it was a matter of mercy finish off the mortally wounded Svalfang.

The brave duo headed back to slake their thirst in Bree's Prancing Pony. Slaying giants is a muckle business but boasting about it in a tavern afterwards is a very pleasant past time. Throg was all the more satisfied when Amlan caught up with the pair at the 'pony and rewarded them with magical necklets that had been retrieved fro Svalfangs hoard.
Email Post
Labels: lotro MMORPG