On Saturday Throg spent three and a half hours in the 6 man instance of Carn Dum with a kinship group. It was a pretty successful run - Several of us knocked off a few quests and one of our hunters got the rare "slime" he needs for his class quests. We had an experienced tank and healer who directed events (plus had all the keys needed to access the fortress) so it went smoothly. Highlight of the run for me was a set piece fight against the giant octopus who drops the aforementioned slime. 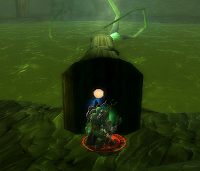 Carn Dum is not a raid instance but it is a major fellowship instance with many bosses. It is woven into the epic storyline and it is the only place to get some vital class drops (but not funnily enough for champions). As keys must be collected to open access to the stages and as each boss only drops one critical item kinships can be expected to visit CD many time in order to allow their members get all the stuff they need to progress.

I am sure it gets boring after the 10th time but I really enjoy this type of focussed group play. However - setting aside three to four hours to play an instance uninterrupted is quite difficult for me and makes me wonder how much further I can progress in the game. If I expect fellow kin members to spend three or four hours getting my high level items then I need to return the favour - that means running long instances like CD many times and at the moment that creates a difficulty for me.

I mentioned before that I would like to have a go at raiding but as that probably needs even large uninterrupted blocks of time so I will need to be realistic about what I can and cannot do.

Lotro is unusual in that you don't actually have to go raiding to get epic gear. You can buy very high level stuff on the AH given enough gold. However I have spent a good deal of time solo grinding over the last week or so (traits, pages and cash) and I nearly went bananas. I offered my services to the first group I found just to get back into doing group quests.

This is a slightly rambling post but I guess once of the points I am trying to make is that "long" instances can be insurmountable barriers to casual players like me. I love grouping and I love challenging instances but setting aside uninterrupted blocks of time is a challenge.
Posted by mbp at 12:06 pm

Yeah, the big chunks of contiguous time are what I have a problem with. I was just poking around the Elitist Jerks forums, and found
a thread along similar lines.

(Though being raiders, three sessions of three hours a time are the baseline extreme-casual level.)

I think that's another reason I've been playing more single player games recently, pause keys are an infinitely better way of managing wife aggro, "not now, dear, we're nearly up to the penultimate boss" doesn't cut the mustard for some reason...

Thanks for that link Zoso - it makes interesting reading even though I have to admit that when I read about people playing four hours at a sitting five nights a week I think they must be living on a different planet than me.

Its about wife aggro certainly but it is also about life choice and whether or not I want to opt out of the real world entirely. Four hours sitting a a game with no break means I am totally cutoff. Four hours of gaming spread over an evening with breaks in between to check kids homework, talk to wife, put kids to bed etc allows me to feel part of the family.

The thing is - I really like grouping and I like taking on epic challenges in a group. Sadly there is a certain time overhead associated with grouping and the bigger the group the larger the minimum chunk of time has to be.