December 19, 2010
I'm not really into building / crafting games so I had given Minecraft a miss until yesterday when I realised that the price goes up by €5 with the release of the Beta version on the 20th December. A game that sells over 800,000 (and rising) copies at a tenner a piece despite being laughably ugly and still in alpha must have something going for it, mustn't it? I reckoned it was worth a punt for a tenner and anyway it might be something to amuse the kids who are a bit more craft minded than I am.

I logged in and paid my money before launching the browse version of the game.  I sat down with my daughter to play it for a bit. Gosh it is ugly isn't it? Single player "peaceful" mode seemed like a good place to start getting familiar with the game and thanks to paulsoaresjr's helpful video's we were soon chopping down trees and crafting basic items like torches and picks. My daughter was intrigued by the crafting interface so we started experimenting to see what other items we could make. Soon we had a shovel and a rake but the significant breakthrough was a furnace. The furnace allowed us to make some kind of baked rock and  sticking beach sand into it produce glass! This was fun. Unfortunately further attempts at discovering random crafting patterns failed. My daughter was particularly disappointed when she put a lot of effort into gathering wool from sheep but was unable to make any she could wear from it.

At this point I guessed that we might need some more exotic materials so we started tunnelling down eventually finding a small amount of a new ore that smelts into ingots of what I later found out was Iron.  Unfortunately we only got enough to make a slightly better pick. My daughter got bored and wandered off to play something else.

So much for the wondrous discoveries we dreamed of making. We had been playing for over an hour and we had nothing to show for it except for a few basic tools and a bag full of useless rock and wood. I was ready to chuck it in myself but before I logged off I thought I would see if I could make some kind of crude dwelling with all that stone and wood.

Two hours later I was still playing and the penny finally dropped. Minecraft is not just a game about discovery. It is a game about creation. It is a magnificent lego set that allows you walk around and interact with your own creations. When my daughter saw what I was doing she wanted back in and we spent several further hours playing.

The ugliness still upsets me a bit but I remembered hearing about mods which tart the game up a bit so I installed the lovely Scribblecraft skin an now everything is a lot easier on the eye. Here is my humble abode complete with mineshaft outside the front door: 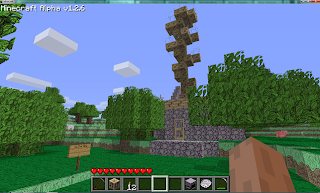 bba01 said…
Hi,
My name is Bogdan from Romania! I want to make friends!
Can we be friends?? LinkExchange??
My blog address is: www.bogdanstelistul.blogspot.com
Thank you!!!!
7:51 am

Hybrid said…
I picked up Minecraft a few days before it went beta. I had only played it before during that free to play weekend when the login servers were down. It seems to be one of those "just one more turn" games, but turns could be the day/night cycle. Very addicting, but fun. For crafting just about everything (the site says it's a complete list) I'd recommend --> http://www.echidnatribe.org/Minecraft/crafting.php
9:32 am

mbp said…
A very useful link, thank you Hybrid. Minecraft Wiki is also a great resource. My kids have really got stuck into Minecraft now so I bought another license and set up a private multiplayer server so they could both play together. They just love building houses and stuff.
4:36 pm

minecraft skins said…
Great,how could you find that,thank you for your sharing,
cookie monster minecraft skin
6:02 am