What is it with trousers in Lotro? They seem to be the quite rarest form of apparel. At level 41 most of Throg's armour was still shiny and new but his aging pants were getting decidedly shabby and even the auction house could not offer suitable replacements.

Consulting his notebook of petitioners asking for a champion's assistance Throg spotted that Callenthon in Nan Tornaeth was looking for someone to slay the undead horror Gurdring. Most interesting to Throg's eye were the fine pair of Explorers legging on offer to whomsoever completed this feat. Forming an impromptu fellowship with a passing Guardian Throg accomplished the deed with ease and claimed his trousers. No more will folk laugh at Throg's red spotted undershorts as they peek through holes in the seat of his pants.

After dispatching Gurdring our mighty dwarf looked to see if any further loose ends needed tying up in the locality. Thanks in no small part to Thog's previous efforts the Trollshaws are far less unruly now than previously but there remained a nasty spider infestation in the North.

These elite spiders are far too tough to tackle solo but Throg got great assistance from his new kinship. Following the directions of the scout Thoroniel the fellowship set out to slaughter the arachnids. 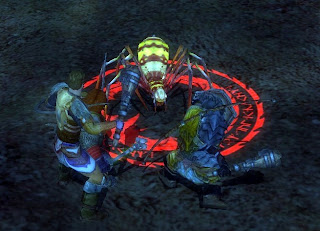 Now no one can question Thoroniels bravery but it seems to Throg that her grasp of strategy is somewhat lacking. Instead of sending the group for one decisive blow against the mother spider Thoroniel continued to set them lesser objectives (thinning numbers, destroying egg sacks and such). This situation was not improved when later volunteers arrived to swell the fellowships ranks. Instead of using the extra force to launch an immediate final assault Thoroniel insisted that the new arrivals first learn the ropes repeating all the pointless prior tasks!

Far from weakening the spiders these trifling blows merely served steel the beasts resolve so that when Thoroniel finally commanded the assault on the Mother Spiders den the party had already trekked the same path many many times and butchered hundreds of spiders.

After such wholesale slaughter the Queen was indeed an anticlimax. No matter - Thoroniel offered Throg a choice of rewards and he chose a nice new pair of boots. When your head is as close to the ground as our brave Champion's is you understand the true value of strong boot leather!
Posted by mbp at 2:09 pm