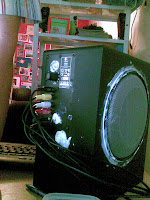 I bought a new set of 5.1 speakers a while back but the subwoofer volume was way too high. It has an independent bass control but even on the lowest setting the subwoofer was unpleasantly loud and listening to any track with a bass component (basically any music created in the last fifty years) was painful. I managed to muffle it somewhat with the aid of copious amounts of wadding and duct tape but I was never really happy with it. When playing shooters for example I would invariably opt for headphones in order to avoid jarring noises from the gunshots.

Well a few months have passed and the shininess has worn off the speakers so I decide I was ready to void the warranty by looking inside to see if I could rig the volume pot to have a lower range. I was an electronics hardware designer in an earlier life so I more or less knew what I was doing although I never really worked on audio systems.

Getting into the sub-woofer box was easier said than done. First there was a ridiculous amount of screws holding everything together. Even after the screws were removed I still couldn't work the panel free because of captive cables. No easily snapped on or off connectors here - everything was soldered and then glued in place for good measure. I reamed a couple of the screws trying to remove them even though I have good tools. I cursed the designers. Whoever designed this box clearly had no concept of maintainability. Anyway after about an hours worth of unscrewing and cutting through glue I eventually got a good enough look at the circuits to plan my attack. I found the relevant circuit and was about to modify it when I spotted a capacitor bent over with its leg shorting to a resistor beside the volume pot. Hmmmm....

Sure enough that turned out to be the problem. Straightening that cap tamed the subwoofer down to normal volume levels. I put everything back together and did a sound test with the aid of David Taylor's excellent Sweepgen program.

Sound levels were fine but Sweepgen highlighted some nasty resonances. My 45 year old hearing isn't great but I find that by slowly sweeping a sinewave through the frequency range in manual mode I can spot the jarring buzz of a resonance. Feeling my way around the subwoofer I spotted the cause of the first resonance - a hole left by my botched attempt at removing a reamed screw. Every other resonance likewise turned out to be due to something I removed in my attempts to get into the box. Even the glue around the power cable turned out to be necessary. I finally began to realise why the box had been designed like Fort Knox. Any air leak causes a resonance. Any component that is not 100% nailed down causes another. All the screws and glue were absolutely necessary.

Silicone sealant to the rescue. I glued down everything that moved. It is not pretty but at least it behaves itself now. Apologies for the crappy picture. It was taken with my phone in poor light.


Edit: Oh by the way if you are looking for a piece of music to test your sub woofer then I recommend just about anything by Joan Jet.
Posted by mbp at 6:49 pm